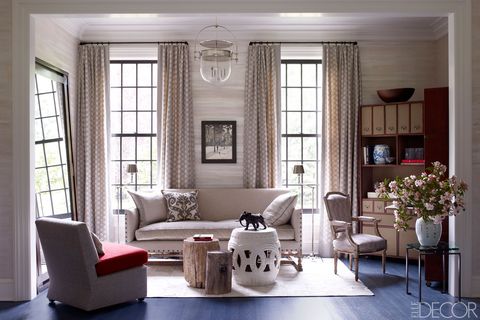 For most city dwellers, having a weekend house traditionally meant getting away from it all—perhaps to a place near the water, or somewhere nestled in the piney woods. But then came the overdevelopment of many formerly bucolic enclaves, and its ugly twin: the unbearable drudgery of weekend traffic. For one New York-based couple, the three-hour haul from their townhouse on the Upper East Side to the Hamptons each Friday evening became too stressful. So they went where few weekenders had gone before: to Greenwich, Connecticut, the ultimate suburb for city commuters. Only 40 minutes from Manhattan, the Fairfield County town is widely considered among the area’s most luxurious bedroom communities. But to this couple with young children, Greenwich would become a leafy refuge at the end of a hectic week. The living room of a Greenwich, Connecticut, home designed by Thom Filicia includes a 19th-century Italian sofa from Lucca Antiques upholstered in Belgian linen, petrified wood and ceramic stools, a light fixture by the Urban Electric Co., and a Louis XVI armchair; the side table is from Lillian August, and the mirror is by Thom Filicia Home Collection. 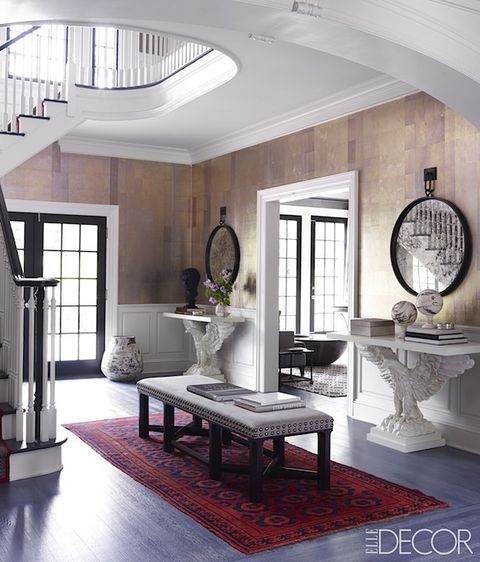 When they found the house of their dreams, a neo–Georgian Colonial built in the 1980s on 12 acres of lush land, it fit their needs to a T. It had plenty of room for the children to play and for the couple to throw dinner parties—not to mention ample space for company, with seven bedrooms and nine baths. But the decor felt 30 years out of date, with wall-to-wall carpeting and a lot of ’80s-era chintz. The couple had a very different vision: They wanted a warm but modern getaway, one that was casually elegant with a decidedly New England vibe. They turned to Thom Filicia, who is known for his relaxed take on American style, and whose restoration and updating of his own lakeside house in upstate New York is documented in his new book American Beauty. “They wanted some peace and quiet without the drama,” says Filicia, who came to prominence in the early 2000s as the design maven of television’s Queer Eye for the Straight Guy, and who has decorated everything from Jennifer Lopez’s beach house to the interiors of W hotels. The consoles in the foyer are by Filicia, the mirrors are by Jonathan Burden, and the bench is from Hickory Chair. 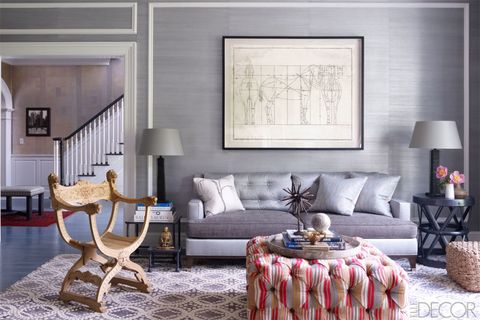 FAMILY ROOM
In the family room, the custom sofa is flanked by lamps by Lucca Studio, and the round iron table is from Lillian August; the carved wood chair is vintage, the Filicia-designed ottoman is upholstered in a Kravet wool, and the walls are covered in a grass cloth by Phillip Jeffries. 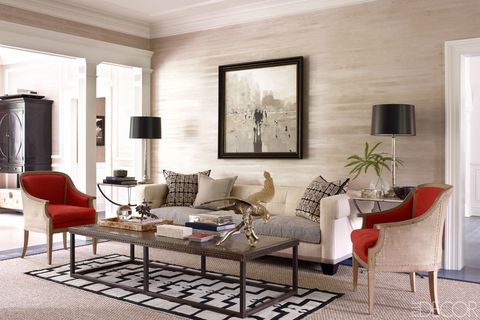 “This house was a huge project,” he says of the 10,000-square-foot home that includes a full spa with a sauna and yoga room. He was given a budget and a year to complete the design. The goal, he says, was “rooms that had a classical reference, but nothing stodgy.” The couple certainly aren’t stodgy. They are part owners of the bespoke London tailor Douglas Hayward—the haberdashery that lent Michael Caine and Terence Stamp their sartorial cool. The ethos of British tailoring, with its precise fit and luxurious but understated materials, informed their design preferences. They wanted rooms comfortable enough for the family to gather and read by the fire, but it was also important to them that the interior reflect the same sort of quiet dazzle that Douglas Hayward represents: sumptuous textiles, perfectly executed details, not too many frills. The living room’s sofa is by Thom Filicia Home Collection, the cushions on the burlap-backed armchairs by Lucca Studio are covered in a Loro Piana linen, and the lamps are by Robert Kime; the walls have a marmorino plaster finish, and a rug from Galerie Shabab is layered over one by Sacco Carpet. 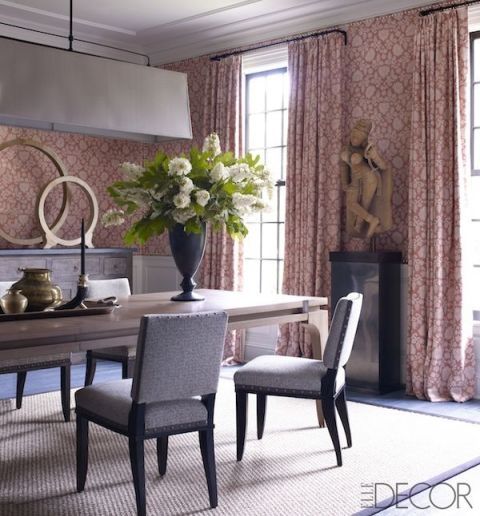 DINING ROOM
Filicia’s furnishings—he creates pieces for Vanguard Furniture, as well as fabrics for Kravet and rugs for Safavieh—are employed throughout the house, from a deep-seated sofa upholstered in mohair velvet in the living room to a tufted headboard in the master suite. To amplify the all-American spirit of the decor, Filicia placed two consoles featuring carved-eagle bases in the entry hall to greet visitors. These are paired with antique round mirrors set in contemporary steel frames. “There is a formality to it, but it’s not stiff,” says Filicia. “That welcoming space epitomizes the tone I was trying to set throughout the house.” Custom-made chairs upholstered in a Zinc fabric surround a dining table by Filicia. The light fixture is by O’Lampia, and the wall and curtain fabric is from Rogers & Goffigon. 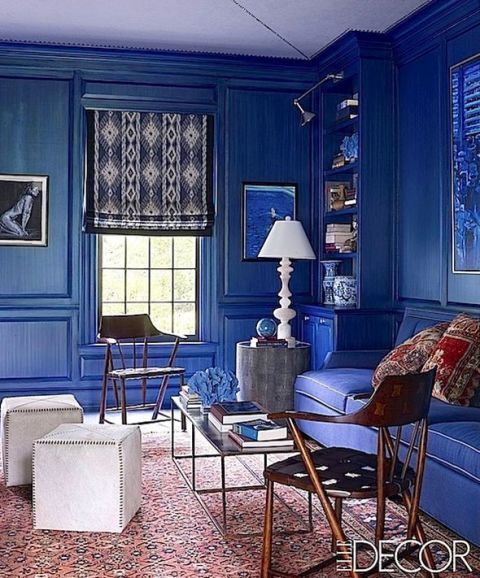 LIBRARY
The couple could have filled the place with 18th-century antiques—the classically designed rooms and endless white moldings certainly called for them—but they chose a route that would communicate their more modern approach. They gravitated to a palette of blues and toned-down reds and rusts (very New England), and Filicia made those tones pop by setting them off with neutral fabrics and tactile wall treatments such as grass cloth. Antique burlap armchairs in the living room sport cushions of deep red to contrast with sand-color rugs and Venetian plaster walls. Meanwhile, the library is an ode to indigo, from the sofa and walls to the artwork. A pair of vintage webbed-leather armchairs flank a cocktail table by Canvas and a custom-made sofa in the library; the Persian rug is antique, the shade is of a cotton by Thom Filicia for Kravet, and the walls are painted in Pittsburgh Paints’ Daring Indigo. 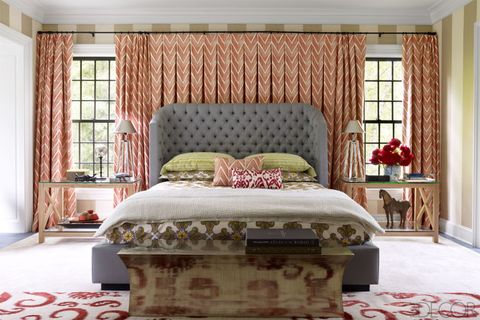 MASTER BEDROOM
“The homeowners wanted things to be elegant but also fresh,” Filicia says. “They’re young, and they wanted the house to feel that way.” The couple entertain a lot, mostly dinners for friends, so the dining room was especially important to them. Filicia lined the walls with a subtle take on a traditional damask, and took care to juxtapose such disparate items as a carved statue of a Hindu goddess with an abstract circular wood decorative piece. “They wanted a weekend home that would be as unfussy and up-to-date as they are,” says Filicia. “They wanted American, but with an edge.” The bed and side tables in the master bedroom are by Thom Filicia, the hammered metal bench is by Paul Mathieu, and the curtains are of a linen from Jerry Pair. 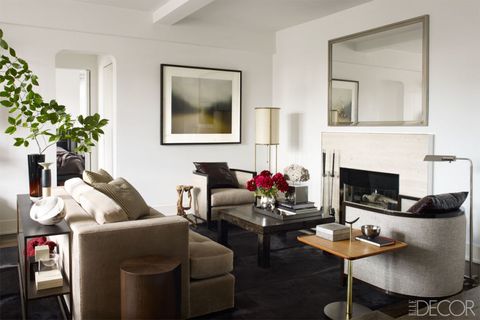 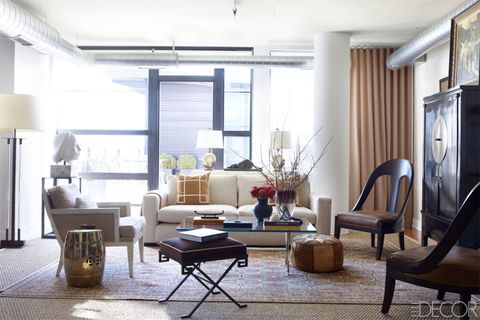