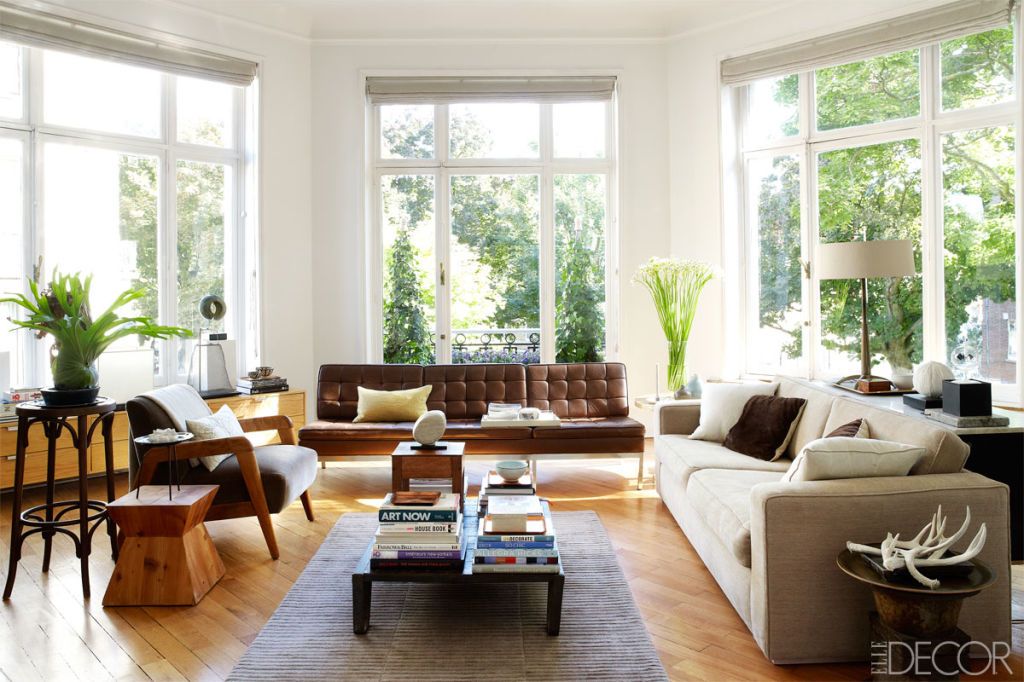 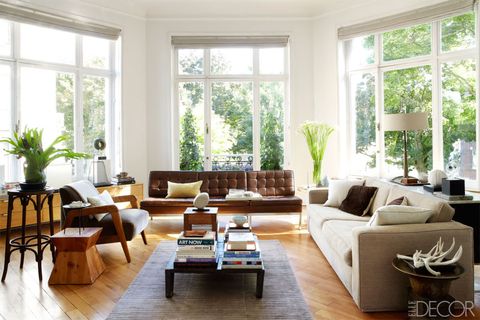 LIVING ROOM
Most of us dream about pulling up stakes and moving to another country, but Melañio Gomez and Chris Kangas woke up and actually did it: They traded Manhattan for Brussels. The story began eight years ago when, while vacationing in Tuscany, the couple discovered a shared desire to one day live in Europe. Soon after their return to New York, they began to toss around the idea in earnest. Six months later, Kangas was felicitously offered a position with MasterCard International in the Belgian capital, and Gomez left his job as the wunderkind home editor at Martha Stewart Living.

In the living room of Melañio Gomez and Chris Kangas’s apartment in Brussels, the vintage Knoll leather sofa was bought at the Brimfield Antique Show, and the 1950s armchair is covered in mohair; the Thonet bentwood stool was found locally, Gomez made the side table (at right) from iron sewer pipes, the rug is by the Rug Company, and the walls are painted in Farrow & Ball Estate Emulsion in Blackened.

KANGAS AND GOMEZ AT HOME
Then came the overseas apartment hunt, a job that fell to Gomez. “We wanted a modern kitchen and a nice bathroom,” he recalls. “And we had a lot of stuff, so we needed a fair amount of space.” Over the course of a week, he looked at lots of new construction, which didn’t exactly fit their vision of the Old Country. He reluctantly settled for a loft space in a quiet part of town until, on the eve of his return to the U.S. to pack up their Chelsea apartment, he spied a For Rent sign in a second-floor window of an Art Deco apartment building in Ixelles, a far more lively neighborhood. Captivated by its soaring 13-foot-high ceilings, generous expanse of French windows, and four fireplaces, he took the place on the spot.

Kangas, left, and Gomez at home.

DINING ROOM
That was in 2007, and the plan was to stay for three years. “We’ve been here for much longer than we ever imagined, and we’re still not ready to leave,” says Gomez, whose career as an interiors stylist is thriving on both sides of the pond. Indeed, when expats in Brussels got word of his arrival, they immediately anointed him the go-to tastemaker for any subsequent new arrivals who wanted to set up house in the city. His first job was as a DIY columnist at a weekly newspaper for English-language readers.

Eames plywood chairs surround a vintage walnut dining table by Florence Knoll, and the lanterns flanking the mantel are by Casamidy.

LIVING ROOM
“I was the Dear Abby of the hardware and home-goods stores,” Gomez says, laughing. “Having done all of the research for putting together our apartment, I knew how dimensions, watts, volts, shade, sheet, and mattress sizes differed. And I learned the hard way that what is called a 2 x 4 board is actually a bit smaller.” That’s no joke for someone like Gomez, who earned a reputation for being the ultimate adapter and improviser during his years as a magazine editor, styling photo shoots. If he couldn’t find the furnishings, lighting, and accessories he needed, he’d make them himself.

The low stool in a corner of the living room is from ABC Carpet & Home, the door’s curtain is of a Ralph Lauren Home stripe, and the circa-1900 brocatello marble fireplace is original to the apartment.

ENTRY
It’s hard to imagine wanting for anything in a 1,000-year-old city that happens to be one of the design cognoscenti’s favorite antiquing destinations. “We go to the markets in Lille, Maastricht, and Paris, but our favorite is Marolles, right here in Brussels,” Gomez says. “It’s down and dirty—you need to take an antihistamine after walking through it.” But he insists that he has added only small accessories to the enviable mix of pieces that was shipped from the States and now fills the couple’s chic apartment.

The steel bench in the entry was found on the street.

MASTER BEDROOM
Behind almost every piece, there’s a story of the get. “I’m a big believer in mixing high and low,” he says. “If an object is beautifully designed, the provenance doesn’t matter.” The origin of the brushed-metal bench in the entryway is a case in point. Gomez hauled it out of a Manhattan Dumpster and topped it with a luxe tufted-mohair cushion. Above it hangs a painting he made in the style of Barnett Newman that he affectionately calls 1 of 3. That’s the number of times he’s painted over it to suit his current tastes. “I’ve had it since college, when I was obsessed with Kandinsky,” he says. “Then I moved into a Rothko phase.”

In the master bedroom, the Danish armchair is vintage, the floor lamp is a prototype by David Weeks, and the photograph is by William Abranowicz; the rug is by Martha Stewart Signature Carpet, and the walls are painted in Farrow & Ball Estate Emulsion in Drab.

OFFICE
In the guest bedroom hangs another painting that was plucked from a downtown Manhattan building about to be demolished: “I snuck in just before it met the wrecking ball. There were dozens of paintings lying on the floor under a tarp. I just loved the muted Superman tones of this particular one,” he says of the colors that inspired the room’s palette.

A George Smith sofa in the office is slipcovered in a Jane Churchill fabric; the armchair is from the 1970s, and the lamp base was made from an antique burl-wood newel post.

GUEST ROOM
Gomez is at his most creative when tampering with objects. He turned a staircase newel post he’d had for years into a handsome lamp in the office, where he fastened a set of legs found at a Brussels flea market onto an Ikea desktop. Long a fan of Eames shelving, he used materials from the hardware store to build a set for the kitchen.

The guest room’s matelassé coverlet is by John Robshaw, the painting was found in a Manhattan loft, and the Thonet coatrack was bought at the Waterloo flea market; the walls are painted in Farrow & Ball Estate Emulsion in Ballroom Blue.

GUEST ROOM
Perhaps the most compelling example of his inspired tinkering shows up in the living room, where the nonworking fireplace appears to be ablaze. Gomez explains how he made the fire: “I took a digital photo of a real fire, blew it up, and mounted it on a wood panel that I painted charcoal black.” Call it American ingenuity with a Belgian flourish.

The guest room features a George Smith armchair upholstered in a Jane Churchill fabric, an Alvar Aalto stool, and a French bistro table; the ottoman is from ABC Carpet & Home, and the vintage teak chest is Danish. 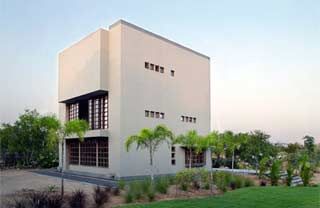 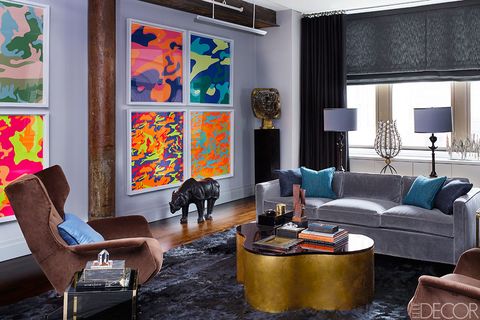