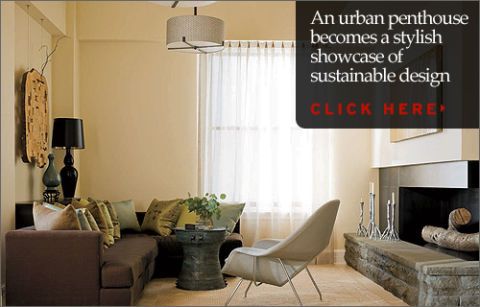 While visiting Copenhagen four years ago, Greg Smith marveled at the number of construction projects there that incorporated sustainable design. “I realized that a love of the environment and a love of building don’t have to be mutually exclusive,” says the Seattle developer. When he returned home, he formed Urban Visions, a company that creates green mixed-use structures.

If he was going to win converts to his way of thinking, Smith realized, he would have to live the kind of life he championed. He gave up his house in the suburbs and signed a long-term lease on the penthouse of a downtown office building that had recently been converted to residential use and certified as LEED silver. Working with SkB Architects and sustainability consultant Monica Smith (with whom he shares a last name, a passion for green design and now his life), Smith turned the 2,200-square-foot shell into a serenely sophisticated aerie that’s so stylish you’d never suspect it was good for you—and for the world.

“The goal was for visitors to walk in and not recognize that it was a sustainable, green space,” says Smith, who subjected every purchase to rigorous scrutiny. At the same time, SkB principals Kyle Gaffney and Shannon Rankin (assisted by Mark Ward and Jami Howard) tried to avoid the burlap-and-Birkenstock earnestness that can afflict green projects. They covered breakfast chairs in an ebullient J. Robert Scott linen and had Smith round up a gaggle of mismatched dining chairs, paint them black and set them around the dining table. “You need a little levity in every project,” says Rankin. 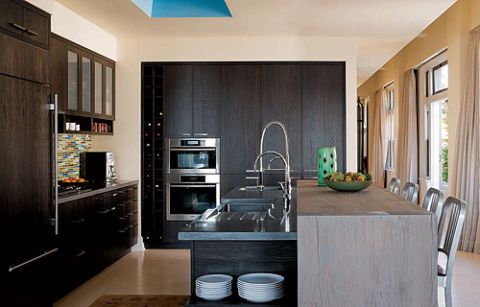 The design team confined circulation to the perimeter of the U-shaped apartment and relegated service functions to the center, preserving Puget Sound and Olympic Mountain views throughout the wide-open 11th-floor flat. Discreet pocket doors divide the space when needed, making the free-flowing floor plan ideal for one or 100.

Formaldehyde-free wood products and low-VOC paints and adhesives were used throughout the project, which was overseen by J.R. Abbott Construction. Except in the library, the original terrazzo- and-marble flooring was too pitted to salvage, so the design team covered it with bamboo laid in a traditional herringbone pattern. Even the furniture is green, much of it fashioned from local FSC-certified hardwoods, natural latex cushions and fabrics made from organic fibers or recycled content. “We were thinking responsibly on all levels,” Rankin notes.

What wasn’t new was often salvaged from Smith’s own buildings. “What do you think we can do with this?” he’d ask the design team after dragging them down to his storeroom to survey old marble toilet partitions (now used as thresholds) or piles of sandstone rubble (deployed as a hearth). A massive fir beam from a 100-yearold carriage factory was repurposed as a breakfast bar, and the barstools are made of 80 percent recycled aluminum. The dusky oak in the cabinetry surrounding it comes by its color naturally, thanks to the decades it spent submerged in a German bog. 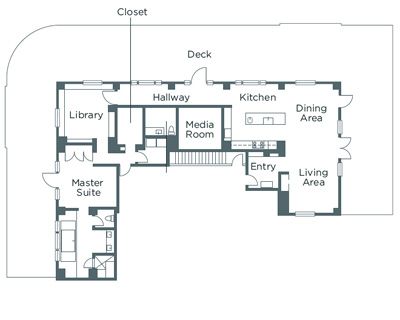 What the Pros Know
To conserve energy, SkB Architects used incandescent bulbs for task lighting and compact fluorescent lights (CFLs) for ambient illumination. Although the average CFL uses about 70 percent less electricity and lasts up to ten times longer than an incandescent, the light can be cold, so SkB chose bulbs with a Kelvin rating of 2,700K or 3,000K (the lower the number, the warmer the light). If you can’t find a bulb’s Kelvin rating, look for packages marked “warm white” (and avoid the cooler “daylight” bulbs). Fabric shades and frosted-glass diffusers help soften the fluorescent light in the great room; the fixtures were also linked to rheostats and fitted with dimmable bulbs, which tend to appear warmer when dimmed. To warm fluorescent table lamps, shades were lined with gold paper (although other warm colors work equally well). While CFLs have improved markedly in the past few years, incandescents are still your best bet for lighting artwork, where accurate color is important.

Since Smith planned to use his apartment to entertain civic and environmental groups, he couldn’t resist a bit of theatricality. The corridor–cum–art gallery connecting the public and private spaces is flanked by a powder room that doubles as a lounge when not in use. (And even then, there’s a theatrical element, since occupants cast shadows on the frosted-glass doors.) Smith commissioned artist Jo Braun to cover one wall with a mosaic made from salvaged mirrors, then furnished the space with a leather lounge chair. “It’s a place people want to visit, not just use,” Smith says.

A salvaged fire door at the end of the hall swings open to reveal a cozy library. The neighboring bedroom—formerly a barber shop—is serenely simple, its organic-cotton-and-wool mattress set against woven-hemp wallpaper (from Donghia), tan Woolshire carpeting and featherweight curtains fashioned from Bergamo mohair and silk. The master bath was designed to feel like an outdoor spa, with slabs of Chinese sandstone covering the floor and tub and a mirrored vanity wall that reflects the billowing veil of bamboo gracing the terrace outside.

Having proved that sustainability can be sexy, Smith hopes to apply some of the same lessons to his commercial projects, which include a 40-story green hotel under development in Seattle and a mixed-use building that utilizes solar energy and a planted rooftop. “We made tremendous steps here,” Smith says, surveying his apartment, “but there are a lot more steps to go.” 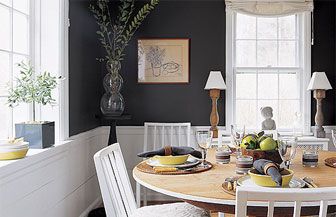 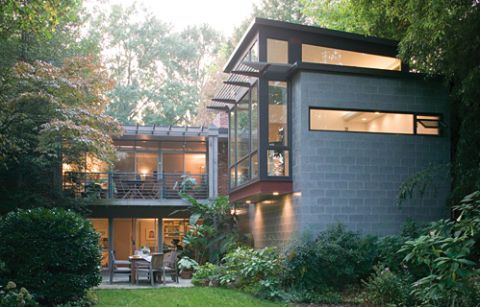