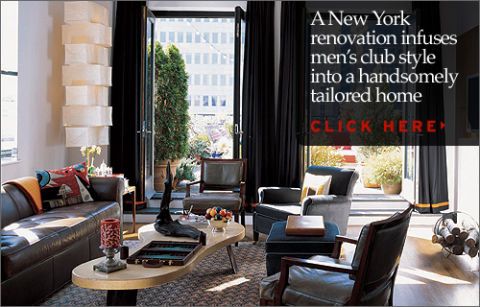 The first time he saw this apartment near Manhattan’s South Street Seaport, Jeffery Povero was underwhelmed. It was part of a 1914 hospital building that had been converted to condos in the 1980s. The space, he says, like many in the city, was a blandly modern box with parquet floors and “Navajo white” walls. It had, he says, “a vague nonstyle.”

Vague wouldn’t do for Povero, a Yale-trained architect who worked for Robert A.M. Stern for ten years before opening his own firm, Povero & Company. If Stern had taught him anything, it was how to create architectural drama, and Povero was determined to play to the apartment’s strengths, which included 11-foot ceilings and views of both the seaport and the Brooklyn Bridge.

Unfortunately, a wall enclosing the kitchen blocked some of the most striking vistas. That wall would have to go, Povero realized, which meant that the kitchen, now on view, would have to be upgraded. “It just snowballed,” said Povero of the project. Pretty soon he was gutting the entire 860-square-foot apartment, which he shares with Jeffrey Schneider, a network news executive.

Within the newly raw space, the Texas-born Povero added hardwood floors, walnut paneling and cabinetry, and a fireplace of brushed Absolute Black granite set into a white surround. To those surfaces he added a mix of such masculine furnishings and accessories as dark leather club chairs and vintage photographs (taken by Schneider’s great-grandfather) and souvenirs of far-flung travels. The idea, Povero says, was to create a private men’s club—with a membership of two.

Jeffery Povero may have the only apartment in America with books arranged in Dewey decimal order. It was an obvious choice for the architect, who spent thousands of hours designing libraries during his tenure at Robert A.M. Stern. Making the modestly scaled apartment feel spacious required other feats of organization. In the living room, the fireplace was offcenter, and there was no way Povero could move it. So he lined up a custom-designed sofa and leather chairs with the center of the fireplace. In that way, he says, he “made the room feel ordered.”

Then, to make the room feel bigger, Povero mirrored the window recesses, a time-tested way of multiplying light and views. But Povero didn’t stop there; he obscured the edges of the mirrors with drapery, creating confusion about where the real views end and the reflected views begin. In the bedroom, Povero again used mirrors to add vistas (the reflection in the segmented mirror over his bed is “very Vermeer,” he observes). Low-to-the-ground cabinets provide lots of storage. And the dark walls (Benjamin Moore’s Iron Mountain) seem almost to dematerialize against white window recesses.

Getting two colors to meet in a straight line was tricky for the painters, reports Povero, who based the effect on the work of Philadelphia architects Howe and Lescaze. In their famous PSFS building (1932), heavy columns are dematerialized by “knife edge” intersections of contrasting colors. In his bedroom, Povero takes the trompe l’oeil further, using the thick white lines of his bookshelves to make the wall plane even less imposing. 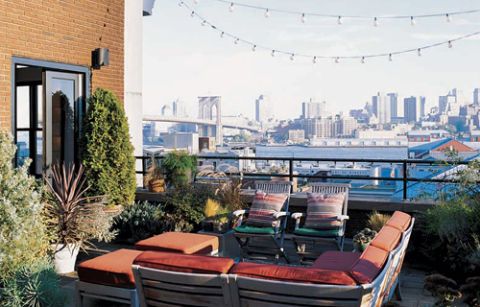 It may be small, but the apartment (with north, south and east exposures) gets large amounts of sunlight. “When you wake up in the morning, the eastern sun is very harsh,” says Povero, who, as an architect, pays close attention to such things. “At that time of day, Brooklyn is in silhouette. But then the light gets warmer as the sun moves through the sky,” he says. “In the afternoon, there’s an hour when it’s hidden behind skyscrapers south of the apartment. And then it comes bursting back in. You get a warm glow off the towers of the Brooklyn Bridge, which become redder and redder until the sun finally sets.”

Povero needed to tame that light, so he installed white cotton shades in the bedroom and floor-to-ceiling drapes in the living room. (He sees the drapes as fabric pilasters, a subtle hint of classicism.) But he also wanted to celebrate the sun, so he used orange tones that light up as brightly as any of the towers he sees from his windows.

Povero generally adapts color schemes for his projects from successful artworks: “If the colors work together in a piece of art, they’ll work together in a room,” he says. Here his inspiration was a mural painted for the famed 1925 Paris Exposition Internationale des Arts Decoratifs, the genesis of the art deco movement. “It had all these colors together, the gray and the black and the greens and the little bits of orange,” Povero says. Forget the boxy, white apartment Povero did not love at first sight; these days he’s living in a brilliantly colored mural.

What the Pros Know
The apartment, at 860 square feet, has several small closets and one big one, off the bedroom. Povero wanted that closet to be more than just a storage space. After all, the apartment needed another room as badly as it needed space for extra hangers. By building “cubbies” for shoes at shoulder height, he freed up the floor, letting shirts and jackets hang lower than they do in ordinary closets. And that allowed him to use the upper shelves as a kind of gallery. The artifacts on display include Povero’s college diploma, a leaded-glass window that he found in a dumpster while attending architecture school, and reminders of his childhood in Fort Worth, Texas. And then there’s the mask of himself he wore one Halloween. Jokes Povero, “It is easily the scariest costume I’ve ever made.” Perhaps, but it’s also part of an artful arrangement that makes the closet feel as important to the apartment as any room. 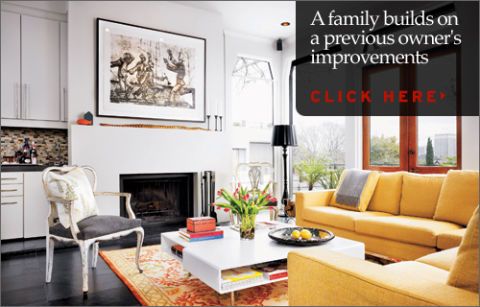 The story of the apartment 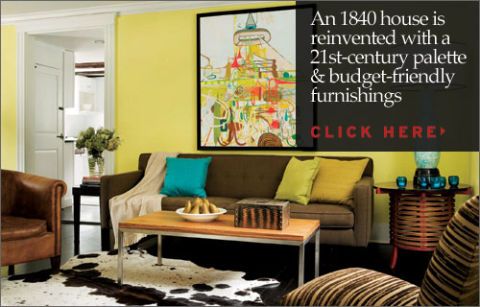 This is a colorful life