HomeDecorReminiscing about the past: the 18th-century residence of Mathilde Labrouche 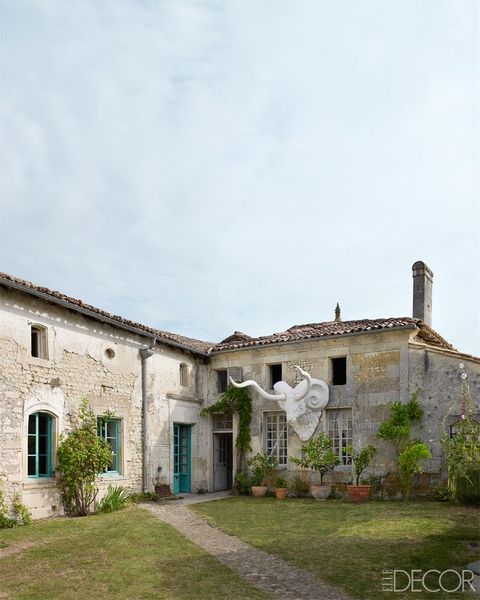 Reminiscing about the past: the 18th-century residence of Mathilde Labrouche

In the living room of Mathilde Labrouche’s home in southwest France is a bed of her own design. It was modeled after an old meat safe and features a rooflike structure. It’s covered with traditional linen and hemp blankets made in Ukraine. “I’ve always liked to create beds,” she says. “I think the world needs rest.

The ram sculpture is by Imperfettolab. 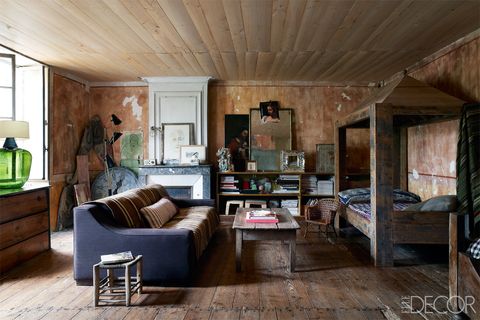 We’re in perpetual motion, and I like people to be able to relax.” Her dream, she adds, is to install a bed in a kitchen someday. In fact, one of her brothers spent his wedding night in what is now her kitchen.

In the living room of Mathilde Labrouche’s home in southwest France, a custom-made sofa is covered with a Turkish throw, the cocktail table is antique, and Labrouche designed the canopy bed. A religious painting and an antique mercury-glass mirror are displayed on shelving formerly used in a textile shop; the marble fireplace is original, and the floor lamp is by Delightfull. 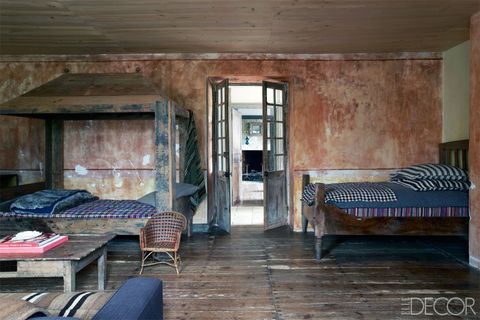 LIVING ROOM
Labrouche’s parents bought the property in the early 1990s. Their first task was to bring about a semblance of order for the nuptials. “Before that,” she notes, “there were chickens indoors.” She can still clearly recall the guests waking the newlyweds in the early hours of the morning to eat onion soup, a well- rooted French tradition.

In the living room, the bed on the right is made of cherry and is covered in vintage Eastern European textiles, and the wicker chair belonged to Labrouche as a childthe walls have a custom lime finish, the ceiling is poplar, and the flooring is a mix of fir, oak, and walnut.

ENTRYWAY
The house itself is located on the outskirts of a small village, about halfway between Bordeaux and Angoulême. There are only about 100 inhabitants and no shops; the surrounding area has a history of sheltering refugees during the Spanish Civil War. Labrouche quite obviously has a passion for the region. She’ll tell you it’s called Haute Saint onge (Saintonge means “land of dreams”), that it’s on a pilgrimage route to Santiago de Compostela in Spain, and that it supplied the stone used to build the Louvre. She also points out that it’s often compared to Tuscany. In summer, its rolling fields are filled with wheat and sunflowers.

The mirror in the entryway was made from antique mercury glass; the custom-made console is of antique oak, the green stools are Hungarian, and the terra-cotta tiles are original to the house.

ENTRYWAY
Her late mother was a native of the region, and both parents settled there in 1951 to work as porcelain painters. They collaborated on designs with Haviland and counted important Cognac families like the Hardys and Hennessys among their clients. “We grew up in a very aesthetic universe,” says Labrouche. “We would drink out of 18th-century glasses.” She initially studied fine art, but soon became interested in buying up salvaged building materials, most notably from Bordeaux. Today, the part of her house that once served as a stable is packed with a dizzying array of treasures. An old birdcage is perched on a rafter. There is a broken cello, an early-19th-century portrait of a woman who seems to peer out from behind a layer of dust, and an impressive accumulation of vintage doors, floorboards, shutters, and mirror frames. Labrouche not only sells them, but also uses them to create lyrical pieces of furniture.

The sofa in the entryway is a family heirloom, and the painting is of the French port of La Rochelle. 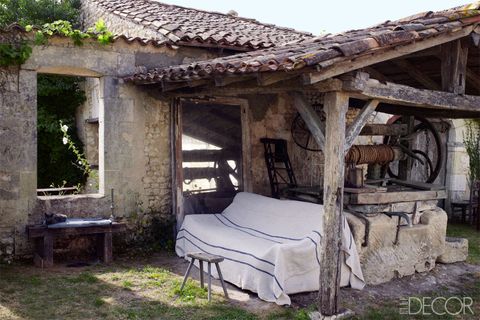 A sofa covered in a vintage tablecloth is protected by the original well shelter, and a Chartreux cat named Zara rests on a child’s workbench. 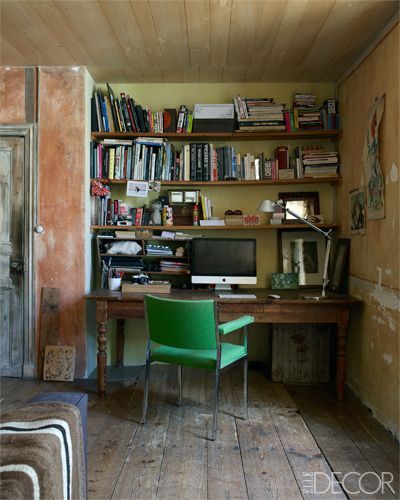 The desk in the office area once belonged to a shoemaker, the chair is from the 1970s, and the lamp is by Artemide.

LIVING ROOM
A table may have stone baluster legs and a top covered in 18th-century terra-cotta tiles. Mercury- glass mirrors are assembled patchwork-style and decorated with illustrations and paper. Some of the latter were acquired for the ABC Kitchen restaurant in New York. She also supplied chandeliers for an Anthropologie boutique in London, and has completed a number of her own decorating projects, most notably a guesthouse and residence near Saint-Tropez. And she deals in textiles from Hungary, Ukraine, Turkey, and Transylvania, many of which she dyes to give them a second life.

Paintings by Labrouche’s mother are displayed above an antique dresser in the living room, the lamp was crafted from an antique bottle, and the stool is African. 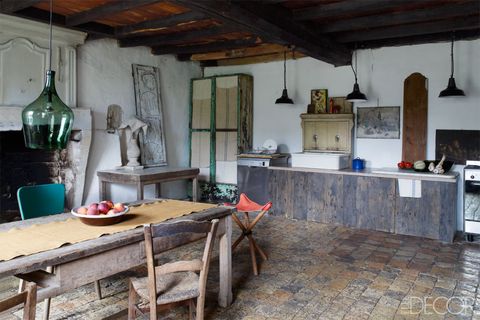 KITCHEN
The oldest part of her house dates from 1785. It was once the local apothecary and later a farm, whose owner–a certain Monsieur Aristide–is said to have been “very festive and generous.” At one time, Labrouche’s great-great-grandmother worked there as a maid. When Labrouche’s parents acquired the house, they split it in two and gave one half to her and the other to her brother. For years, she would simply spend vacations there. Conditions were rudimentary. There was no kitchen, no bathroom, and no running water inside. “Nothing was done in a hurry,” she explains.

In the kitchen, Labrouche designed the oak cabinetry, which is topped with marble from a butcher shop; the industrial light fixtures were flea-market finds, the table is a family heirloom, and the glass light fixture was crafted from an old spirit bottle.

GUEST BEDROOM
Many of the period features were lovingly maintained. The walls in the entrance hall still have the original 18th-century color. When the kitchen was installed, the terra-cotta floor tiles were left firmly in place and modifications were often made using time-honored techniques. She recalls painting the living room with a homemade concoction of traditional pigments and rabbit-skin glue created by her mother.

A custom-made mercury-glass mirror and a vintage armchair in a guest bedroom; the mantel is original.

ENTRYWAY
Labrouche moved there full time with her children, Pablo and Rosa, in 2005 and has since filled the interiors with both poetry and whimsy. The cupboards in the kitchen are made from the floorboards of an old garage. “The waste oil created a great patina,” she observes. The headboard in a guest room consists of a panel of wallpaper dating from the Directoire period, and the entrance hall is dominated by a chicken-wire airplane originally constructed for a parade.

A stool in the entryway holds Eastern European textiles; the oak ceiling beams are original.

BATHROOM
The shower walls are reclaimed planks from an 18th-century house, the chair is from Biarritz, France, and the sink is from the 1940s.

GUEST BEDROOM
In a guest room, the bed cover and side table are from Coté Pierre, Labrouche’s shop, and the flooring and ceiling are fir. 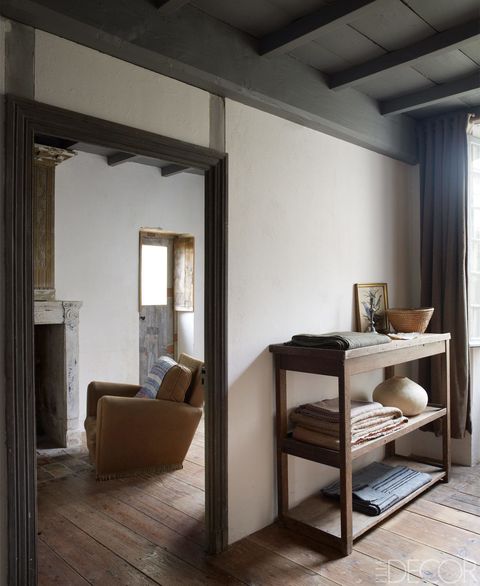 GUEST BEDROOM
“I love objects with joyful connotations,” she says. Labrouche points out a spikelike ornament on the roof–called an épi de faîtage–that is typical of the region and is said to improve fertility. It’s impossible, meanwhile, to miss the huge ram’s head that adorns one façade. It was placed there for Pablo’s 18th-birthday celebration last year and has remained ever since. “I have the impression it protects us,” says La brouche. “It also brings a smile to people’s faces.”

An array of Turkish textiles on an antique shelving unit in a guest bedroom; the curtains are of wool. 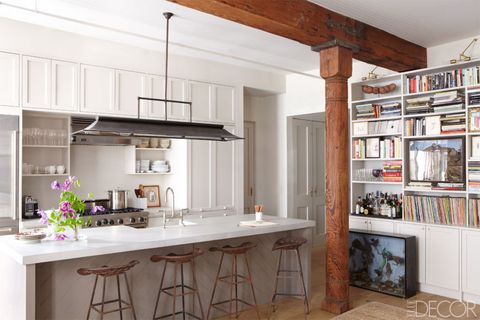 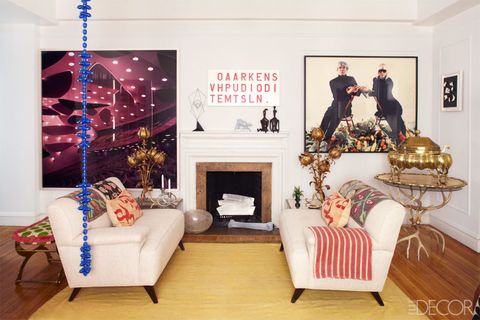