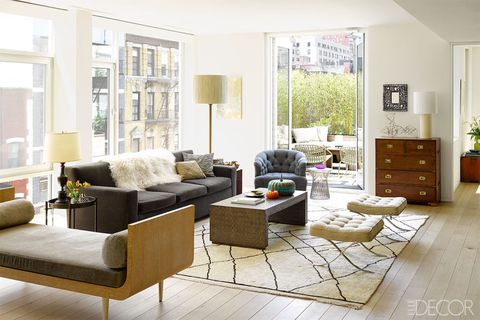 After renovating a townhouse in New York City’s Chelsea neighborhood, Lisa Pomerantz figured she and her family were set for life. That massive undertaking entailed moving out of their home for more than a year, a process that neither she nor her husband was eager to repeat. The tailored results—featured in ELLE DECOR in 2008—were the height of chic and perfectly suited to Pomerantz, a fashion maven who oversees global communications for Michael Kors. “We had plenty of space and we loved it,” she says. “I really thought we were done.”

In the living room of Lisa Pomerantz and Jonathan Copplestone’s Manhattan apartment, designed by architect Peter Pawlak, the sofa, which is upholstered in a Maharam mohair, and the daybed are custom made, the cocktail table is vintage Tommi Parzinger, and the vintage armchair and Knoll Barcelona stools are covered in Rogers & Goffigon fabrics; the 18th-century campaign chest is English, the floor lamp is by Bottega Veneta, and the Berber rug is vintage. 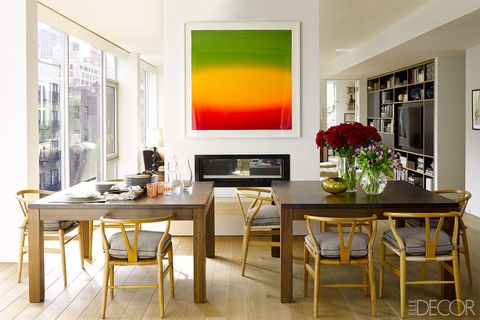 DINING ROOM
But as their boys, Trewin, now 14, and Oliver, 10, aged into their tween years, everything became more complicated. Their private school was located on the Upper East Side, the other side of town. For Pomerantz and her husband, investor Jonathan Copplestone, the commute up and across town began to feel like a burden. They listed their townhouse as much out of curiosity as anything else, but soon received a serious offer. “We hemmed and hawed and then finally had to pull the trigger,” Pomerantz recalls.

The dining room’s custom-made tables are fumed oak, the vintage Hans Wegner Wishbone chairs have cushions covered in a Larsen linen, the photograph is by Hiroshi Sugimoto, and the fireplace mantel is honed travertine. 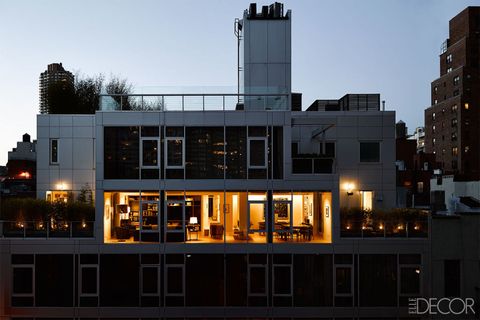 FACADE
The facade of the duplex apartment, with terraces hedged with bamboo. 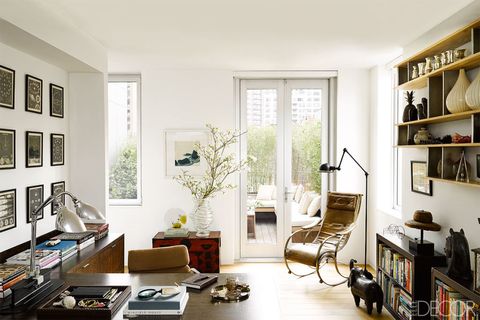 STUDY
The bi-level condo had loftlike proportions and 11-foot-high windows that flooded the space with light by day and provided romantic cityscapes by night. The spacious 3,500-square-foot layout encompassed the building’s fifth and sixth floors. The living and sleeping spaces were located on the main floor, while the downstairs contained a laundry room and guest bathroom, and a den that would make an ideal hangout space for the boys and their friends. What’s more, the building faced a row of low-rise 19th-century tenements, affording expansive views of urban rooftops and open sky from the apartment’s three terraces. “It felt like Chelsea, with all these odd walk-ups and weird scapes,” Pomerantz says. “We left the next day for Costa Rica and bought the place while we were gone, which was a little crazy.”

In the study, the iron-and-brass rocking chair by Robert W. Winfield originally belonged to Pomerantz’s father; the 19th-century chest is Japanese, and the print above it is by Isabel Bigelow; the vintage desk lamps are by Jean Prouvé, the 1950s floor lamp is French, and the metal bookcases are by Tomas Maier for Bottega Veneta. 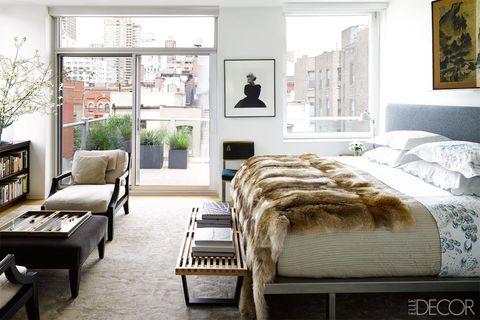 MASTER BEDROOM
She and her husband were confident they could make it work with the help of the same architect they had hired to renovate the Chelsea townhouse: Peter Pawlak, a protégé of Charles Gwathmey. Pawlak devised a plan to improve the apartment’s flow while adding handcrafted details, seamless storage, and a sophisticated lighting system that would cleverly mitigate reflections on the apartment’s glass surround. It was also a chance to revisit their earlier choices and get things right. For instance, in the townhouse kitchen they had installed butcher-block counters, which needed regular applications of sealing oil, and lacquer cabinetry, which scratched. “This time, she wanted low maintenance,” Pawlak says, “so we chose materials that wear well, such as restaurant-grade stainless steel counters in the kitchen, Corian cabinets, and cherry cabinetry in the master bedroom. Cherry is one of the few woods that don’t bleach in the sun.”

In the master bedroom, the sheets are by D. Porthault, the coverlet is by Ankasa, and the coyote throw is by Pologeorgis; the bench is by George Nelson, the armchairs are by A. Rudin, the photograph of Marilyn Monroe is by Bert Stern, and the rug is by Custom Cool Rugs. 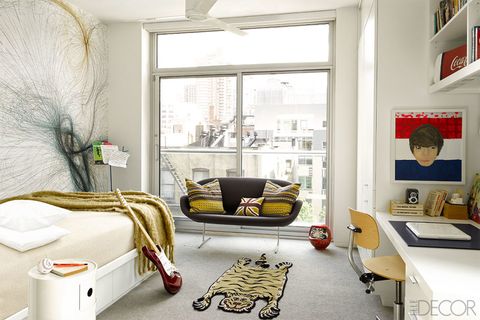 While a career in fashion has continually provided her with inspiration, Pomerantz has also realized over the years that her father’s passion for architecture and design is very much her own. In fact, despite her initial trepidation, renovating two homes for her family within a five-year span turned out to be an eminently satisfying pursuit. “For me, design is simply a pleasure,” she says. “I have decided that if I come back in a second life, this is what I want to do.”

A vintage Swan sofa by Arne Jacobsen and a Tibetan rug in a son’s room; the mural is a Maharam wallpaper by Casey Reas. 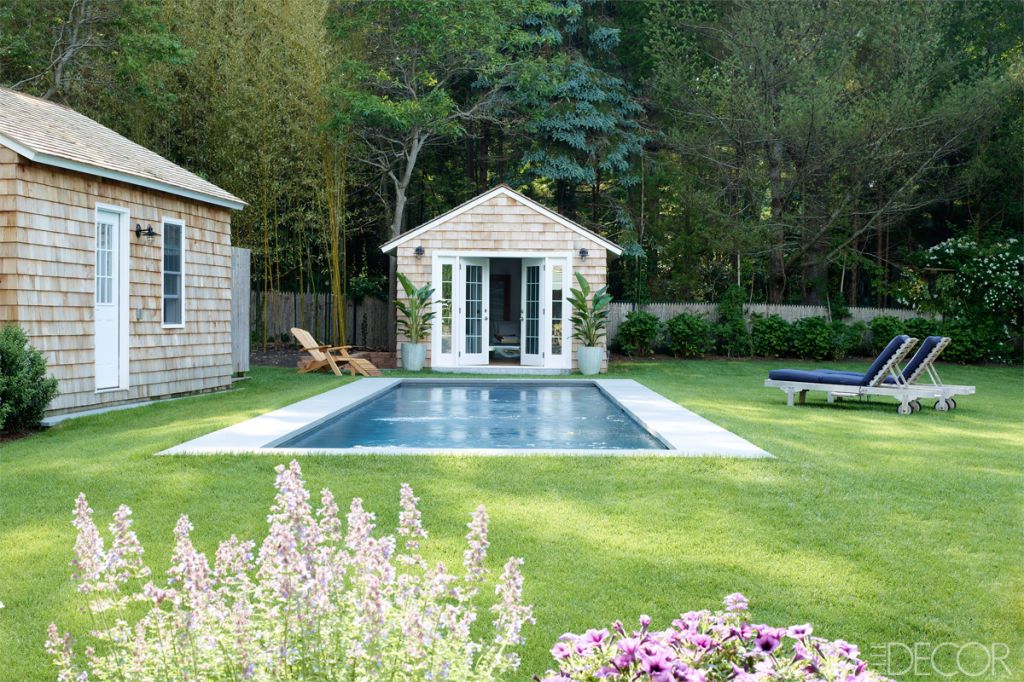 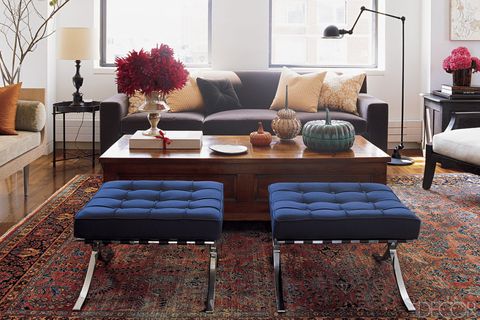