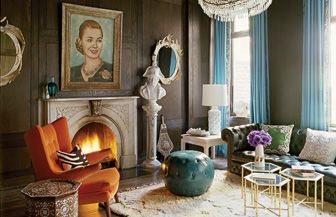 “I CAN BE MYRNA LOY HERE,” Nanette Lepore proclaims, sweeping her arms to indicate the parlor of the West Village townhouse she shares with her husband and business partner, Robert Savage, and their daughter, Violet. Indeed there is something cinematic about the fashion designer’s Manhattan digs. Maybe it’s the spiral chandelier that dangles from the parlor ceiling like a giant earring. Or perhaps it is the dressing room, where an overscale teal velvet pouf sits amid vintage haute couture. From the bodacious color combinations to the Eva Perón portrait that hangs over a fireplace, it seems a perfect backdrop for someone who has said she designs for a “bold woman who has fun and celebrates life.”
Lepore — whose flirty yet polished clothes have fans in Kerry Washington, Mischa Barton, and Eva Longoria Parker — has always dreamed big. Offspring of an artist father and his stylish wife, the Ohio native traces her outsize ideas about romance and adventure to annual family road trips along Route 66 to California. “Those drives made me feel like a gypsy,” recalls the designer, who eventually made her way to New York City. Several fashion jobs later, Lepore struck out on her own, realizing the potential she had demonstrated since the age of 9, when she outfitted a neighbor in a floral-bedspread dashiki accessorized with a beaded choker.

In 2004, when Lepore and her young family were living in an apartment with not nearly enough sunlight to please her, Savage spotted an attractive 1849 Italianate townhouse while walking Violet to school. It was for sale but pricey so he didn’t mention it to his wife. Six months later Lepore noticed the same building, which was still on the market, and told a surprised Savage about her find. After a call to a real-estate agent, they learned the price had dropped considerably, and they jumped at the chance to become the new owners — only to discover that the façade hid interiors totally out of sync with their style.

The yearlong renovation that followed included gutting the bathrooms and transforming the Colonial-style kitchen into a Euro-sleek space lined with gleaming scarlet cabinets. Fussy architectural details added by previous owners were carefully excised to create crisper, more modern spaces, though the marble mantels were saved. “We were told the project would take six months, but the workers were still there nine months later, around Christmas, so we moved in on top of them,” the designer says. “I had planned on having our holiday dance party in those rooms.”

Being able to cut a rug was part of Lepore and Savage’s decorating plan. “Nanette insisted we choose furniture that was light and movable because they are a family that dances,” says Jonathan Adler, who was commissioned to do the decorating. A big-gesture talent too, he designs interiors, ceramics, rugs, pillows, and furniture that embody an irreverent retro aesthetic that more than matches Lepore’s own. “Often my job involves making clients seem a bit more glamorous and eccentric than they might actually be,” Adler explains with a grin. “That was definitely not necessary with Nanette.”
Lepore is an enthusiastic collector of everything from thrift-store paintings and 18th-century Italian portraits to glittering sconces and curious light fixtures. “Before Jonathan came along I was in danger of turning my home into a chandelier shop,” she says, laughing. Adler’s challenge was to create order out of her cheerful chaos, which he achieved by arranging the eclectica into traditional furniture arrangements. The quiet, however, stops right there.

Both Adler and Lepore are known for their bold uses of color, so splashing hues throughout the house with joyful abandon was an essential part of their successful collaboration. On paper the palette reads like a funky ’70s tapestry: teal, eggplant, acid-green, plum, cocoa, orange, lipstick-red. There was a method behind what could have been psychedelic madness, though. The walls were kept mostly white while curtains and upholstery fill the space with the “juicy shades,” Adler says.

Not surprisingly, Lepore’s gypsy spirit is most alive in her dressing room. “Every inch is like a cake with amazing embellishments and gorgeous textures,” her decorator notes. Vintage frocks span one wall, Lepore’s own designs hang on another, and there is row upon row of shoes. It is the boudoir of a chic magpie, someone with joie de vivre. “Nanette should teach lessons in how to eat, how to entertain, how to drink, how to sing — and how to dance until four in the morning,” an admiring Adler says, adding, “She is like Auntie Mame.” Make that Myrna Loy. 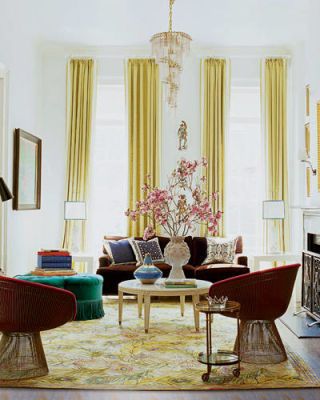 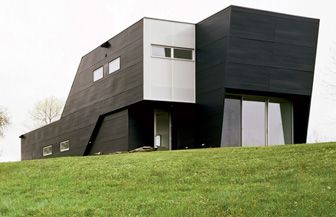