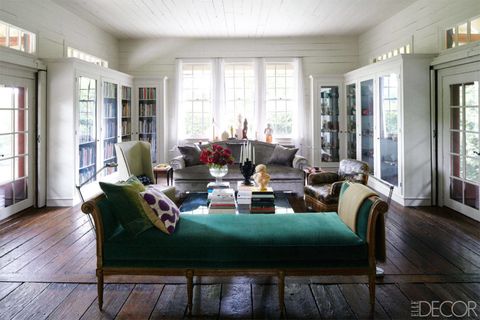 A train station is about the last place you’d expect to find Federico de Vera. Though he’s been a resident of New York City for the past decade, de Vera shuns crowds, avoids subways, and barely even takes taxis, preferring instead to travel in the cool, classical music–filled capsule of his silver Porsche. Meanwhile, the building he bought two years ago to use as a weekend house once thronged with passengers and clanged with freight—livestock, fertilizer, iron ore—heading into and out of the city.

The living room of Federico de Vera’s weekend house, a converted train station built in 1875 in Amenia, New York. The 19th-century daybed is Italian, the silk ikat pillow is by Madeline Weinrib, and the cashmere throw is by Oyuna; the sofa and high-back armchair are by Thomas O’Brien, the leather armchair is Victorian, the cabinetry is custom made, and the pine floor is original. 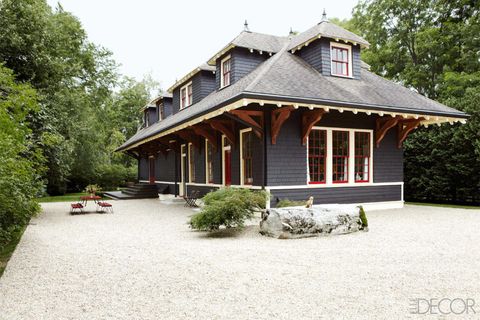 But de Vera has a knack for creating the perfect setting for old objects; in his two eponymous Manhattan galleries, strange and beautiful artifacts are composed so provocatively that perusing them feels more like falling into a dream than shopping in a retail store. The former railway depot in Amenia, New York, has undergone an equally enchanting transformation. De Vera installed a rock garden where warehouses once stood, lined the yard with pea gravel, and invited a panoply of exquisite objects, artworks, and furnishings to take up residence in the renovated waiting rooms, ticket offices, and station masters’ apartments. Adding to the calm is the fact that the tracks where locomotives once thundered to a halt are now a trail where joggers and cyclists puff quietly by.

De Vera’s Chihuahua, Diego, perches outside; the exterior is stained in Benjamin Moore Graphite, with trim in Vermilion and Ivory Tusk.

For de Vera, serenity is not an end in itself so much as a condition that allows him to create, freely and playfully. “I like quiet spaces,” he says. Working in his basement studio several nights a week, he designs extraordinary jewelry from elements both antique and contemporary, or creates collages for his limited-edition books, which include De Vera Objects and De Vera Jewelry.

De Vera on his property, beside a 19th-century marble statue.

When he travels abroad in search of merchandise for his stores, he is unprejudiced by provenance and indifferent to backstory; his eye is drawn only by an object’s aesthetic appeal. He likes what he calls “weird” things: religious icons, architectural fragments, Victorian memento mori, enamel insects, coral branches, classical sculptures. Back in the city, he composes them in ways both whimsical and startling. “To me, the object has to be beautiful, and it has to be presented beautifully,” he explains. Trash placed artfully on a pedestal is still trash, he says. And a gorgeous object in a dull arrangement can be equally bleak. “When I display things, there are pairings that I know are going to work, but sometimes I think, What if I try it this way? Will it be interesting? I want to see if the objects talk. It’s like life.”

In the entry hall, the collection of portraits was bought at various auctions, and a 19th-century Chinese altar table holds gilt bronze candlesticks from Italy, France, and Mexico; the pendant light fixture is by Flos, the walls are painted in Benjamin Moore Regal in Soft Chamois, the door is in Benjamin Moore Regal Select in Vermilion, and the fir floor is original.

Like his life, anyway, for de Vera could be said to owe his whole career to a chance encounter. Born and raised in the Philippines, the fifth of 10 children, he moved to San Francisco in 1984 to attend graduate school. One day, he was out walking on the beach. “I was collecting stones and twigs, like I always do, and I met someone who was doing the same. We started talking.” The stranger owned a gallery called Japonesque. “To me, that was the most beautiful store in the city,” recalls de Vera. “So we became friends.” Before long, de Vera was working in, and then managing, the gallery. But after five years, its aesthetic focus began to feel too narrow. “I wanted to evolve,” says de Vera. “So I decided to drop everything and open my own business.”

A painting by Darren Waterston hangs above a 19th-century Japanese tansu in the living room; de Vera designed the desk, and the Mughal painted-velvet tapestry is from the 17th century.

It was a scary juncture. “At first I worried: Do I have a point of view strong enough for people to see? If I don’t sell anything, I can’t pay my rent. But I just did it.” Almost right away, people took notice. One early customer even reassured him, “This is too good not to make it.”

French folding chairs from the 1920s and a 1950s Adirondack-style folding picnic table in the garden, which was designed by Jason Bonhotel. 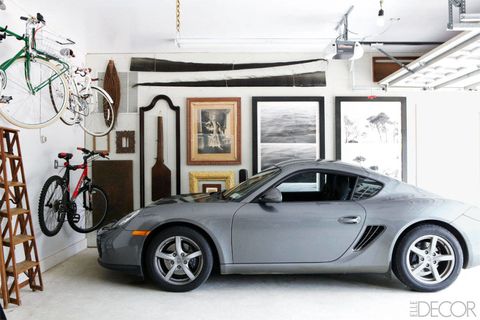 That was 22 years ago. De Vera went on to open his first New York store, followed by a second in 2010. Recently, he closed down his West Coast operation entirely. His Amenia house contains relics from each of these phases—as does his chic, modern apartment in Manhattan’s financial district (featured in ELLE DECOR’s March 2012 issue). “This place is like my diary,” he says. “Some of these pieces go way back.”

A pair of photographs by Johnna Arnold, an antique ladder, and a Philippine wood oar in the garage.

He says that the very best objects wind up in the stores, with only the rejects following him home. “I bring things here when I’ve had them for a long time and no one’s bought them.” But it doesn’t mean he appreciates them any less. “I love everything. That’s why I have them. It’s not decoration. My attachment to these objects is personal.”

A late-19th-century iron rocking chair and an early- 20th-century Indian stool in a corner of the living room; the artworks include photographs by Nicholas Nixon and Brigitte Lacombe, and prints by Jean Arp, Alberto Giacometti, and Henry Moore.

Yet de Vera insists that, in a heartbeat, he could sell any of them. “If I buy an object, I could sell it, because that’s what I do.” Paintings, however, are an exception—he has dozens of them, portraits mostly, lining his 14-foot-high walls. “I’m not an art dealer in that way. The paintings are like family; I could not part with any of them.”

In the entry hall, a circa-1810 French daybed is covered with a 19th-century Mughal silk bedspread; the original ticketing window is now a cabinet containing religious relics, and the 19th-century Turkish rug is from ABC Carpet & Home.

And so the paintings endure, mute witnesses to the objects that have traveled here from around the world like so many passengers, arriving at this curious destination only to discover that it’s just where they belong.

In the dining room, 19th-century Shaker, Louis XVI, and Gerrit Rietveld–inspired chairs surround a 19th-century French trestle table; the silver pendants are Peruvian, the glass candlesticks are Italian, and the walls are painted in Benjamin Moore Regal in Misty Gray.
The cabinetry and marble-top kitchen island are custom made, the nickel display case is 19th century, and the pendants are by Urban Archaeology. 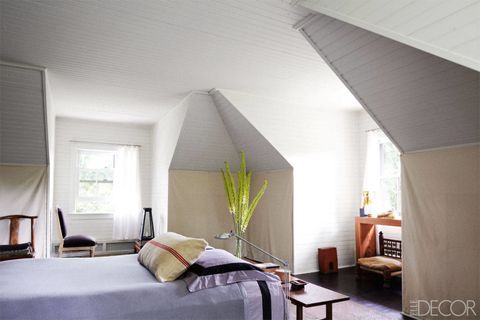 The master bedroom contains a Louis XVI chair, an 18th-century Chinese chair, and an antique Japanese writing desk used as a bench; the linens and cashmere blanket are by Frette.

A sink by Kohler in a powder room; the antique tribal chair is from the Ivory Coast, and the floors are painted in Benjamin Moore Alkyd porch and floor enamel in Graphite.
De Vera designed a guest-room bed to store vintage parchment-covered suitcases; the 1950s side table is Danish, the 20th-century desk is in the style of Louis XVI, the chair is English Arts and Crafts, and the rug is by Madeline Weinrib. 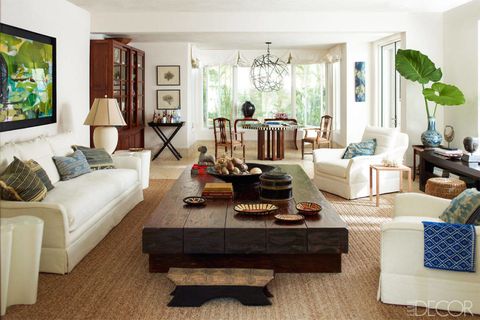 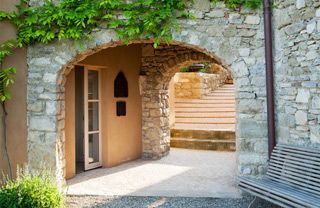