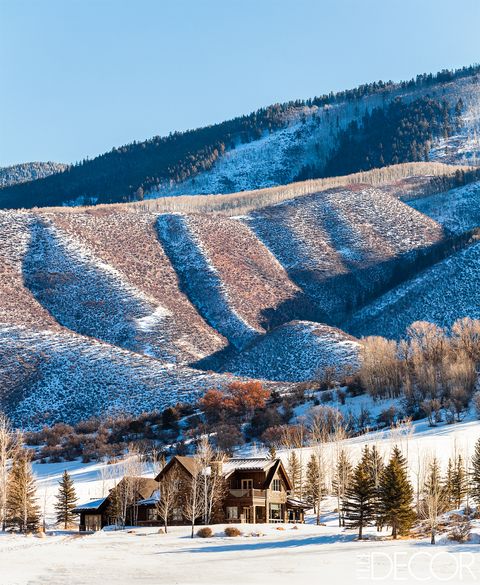 The homeowners of a once pedestrian, now chic yet understated house in Aspen, Colorado, are unconditional fans of Paris-based decorator Caroline Sarkozy. “We love everything about her style,” the wife raves. “It’s classic but modern, comfortable and warm without being fussy. And we like that our house doesn’t feel like a clinic. We’re not keen on everything being bare and spare.” Sarkozy herself attributes her eclectic aesthetic to her nomadic childhood. Although she was born in Paris and is half-sister to the former French president, her upbringing took a global route when her mother, Christine de Ganay, married American diplomat Frank G. Wisner, who has served as the U.S. ambassador to Zambia, Egypt, the Philippines, and India.
A house in the foothills of the Rocky Mountains, on the outskirts of Aspen, Colorado, which was renovated and expanded by Paris-based designer Caroline Sarkozy and architect Laurent Bourgois.

ENTRY
The clients have a similarly international profile. The husband was born in Iran and raised in England; his wife is Swedish. They were drawn to Aspen not simply by the allure of winter sports but for the sunny, culturally rich summer months, a highlight of which is the season-long Aspen Music Festival. “I’ve never been to a place that offers so many things,” she says. “There’s music every day, everywhere. There’s hiking, fishing, and biking. Plus, if you want Prada and Gucci and Nobu, you have that too.” In the entry, an 1880 Belgian table, a 1940s Kaare Klint sofa, and a 1937 Josef Frank cabinet found at Christie’s; the staircase is made of antique oak, and the floor is paved with Belgian bluestone. 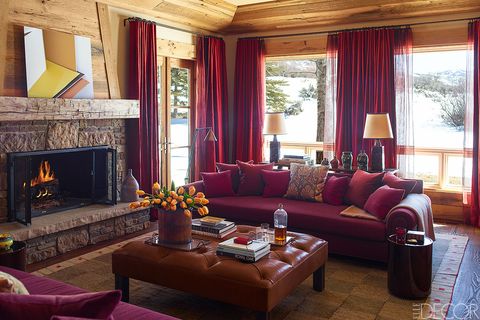 The couple have a decade-long relationship with Sarkozy, who initially revamped several rooms in the husband’s London apartment and decorated a home for his mother. For the Aspen project, Sarkozy collaborated with French architect Laurent Bourgois, who oversaw the renovation of the structure while Sarkozy handled the furnishings and finishes. The library’s custom sofas are in a wool by Bruder, the ottoman is covered in a Moore & Giles leather, and the artwork above the fireplace is by Ethan Ryman; the walls are antique oak, and the rug is custom made. 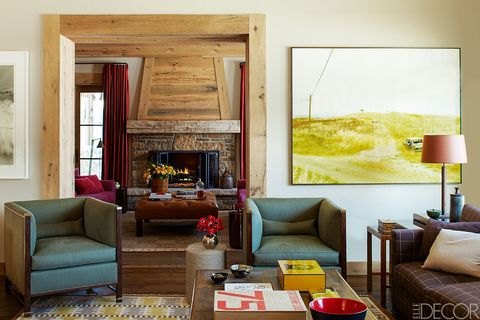 Built in the 1980s, the house itself was no architectural gem. “It was run-of-the-mill,” Sarkozy explains. “It lacked charm and personality.” The walls were covered in stucco and painted bright yellow. There were lots of cheap-looking terra-cotta tiles, a circular staircase with a wrought-iron banister, and arches everywhere. “It was like a bad interpretation of a Spanish hacienda,” says the wife. The custom-made armchairs and sofa in the living room are upholstered in Rogers & Goffigon fabrics, the photograph is by Elger Esser, the vintage rug is Swedish, and the floors are chestnut. 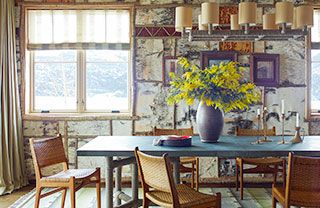 The location, however, was breathtaking. The eight-acre property is situated in the foothills of the Rockies, near the Snowmass ski resort, with views of the sweeping plain. “The landscape is so vast, it’s astonishing,” Bourgois says. “The view is like something out of a Western film.” The house is surrounded by nature yet just a 15-minute drive to the bustling town. “It feels so remote because you can’t see other houses,” adds Sarkozy. “It’s more like a ranch.” Hans Wegner chairs from the 1950s in the dining room; the table base and chandelier are by Christian Astuguevieille, the walls are lined in a grid of birch veneer framed with split branches, and the rug is by F.J. Hakimian.

Only minor changes were made to the exterior—Bourgois simply tweaked the facade by moving some windows and repositioning chimneys. He did, however, extend one side of the house to create a spacious new kitchen and expand the master suite above it. The terrace off that suite is where the wife spends her early mornings in the warmer months. “I like to have my cappuccino up there and watch the world wake up,” she says. The kitchen features Belgian bluestone counters, custom-made painted-pine cabinetry, and a pendant fixture by LB Studio; the stove is by Viking, the ovens are by Miele, and the sink fittings are by Blanco.

KITCHEN
The interior, on the other hand, was completely gutted. “The proportions of the rooms were off-kilter,” Sarkozy explains. “They were not very big, but had cathedral-like ceilings.” In their place, lower, but larger, spaces were created. The sloping ceilings on the second floor, for instance, are six feet beneath the actual roofline. A Harvey Probber table and 1950s Wegner chairs in the kitchen. 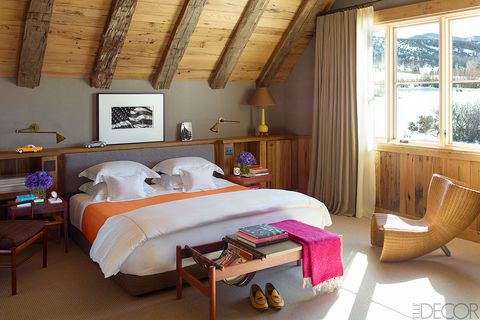 Style-wise, the owners initially wanted interiors that had the feel of a log cabin—”But that’s not what we inherited,” says Sarkozy. “That would have been at odds with the exterior.” Instead, she and Bourgois sought to conjure the look of a European chalet—less hokey, more luxe. They imported wood from Canada for the door and window frames, wall paneling, bookshelves, ceilings, and beams. They also installed a stone fireplace in the library. The most rustic-chic touch is the wall treatment in the dining room, which consists of a geometric pattern created with birch marquetry. “It’s a material that has a life and peels,” Sarkozy says. To avoid disintegration, she applied a layer of varnish. In the master bedroom, the linens are by Linge au Coeur, the wicker chair is by Ron Arad, and the artwork is by Robert Longo; the curtains are of Rogers & Goffigon linen, and the carpet is by Godfrey Hirst.

In contrast, the furnishings steer clear of mountain clichés. In deference to the origin of the lady of the house, there are smatterings of Scandinavian design. One of the first items found for the home was a Josef Frank floral-print cabinet. “It reminds me of my childhood in Sweden,” the wife says. “It was one of those iconic pieces of furniture when I was growing up.” Others have a more local provenance. The use of muted reds, greens, and blues was inspired by old American barns, and the artworks include a Clifford Ross photograph of nearby Mount Sopris. The entry holds an Arts and Crafts sideboard purchased at Rago Arts, a 1960s lamp, a sconce by LB Studio, and artworks by Vahakn Arslanian (left) and Ethan Ryman.

The chandelier in the entry hall, meanwhile, is one of the rare exceptions to the anti–log-cabin rule. It’s made of deer antlers—as classically Western as it gets. Bourgois says, “There had to be at least one thing—an homage to the spectacular surroundings.” The guest room’s walls are sheathed in a de Le Cuona linen, the artworks to the left are by Cordy Ryman, and the bench is palm wood. 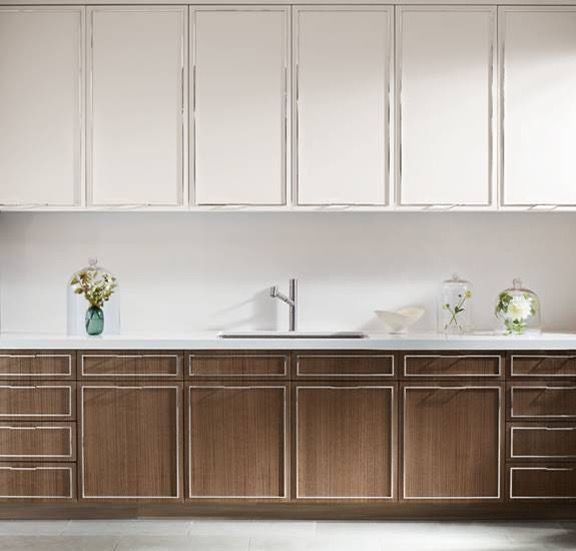 According to the designer, the top design trends of 2020 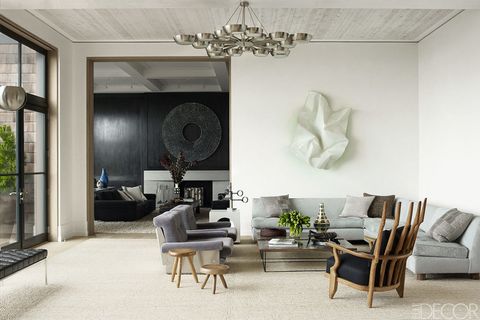 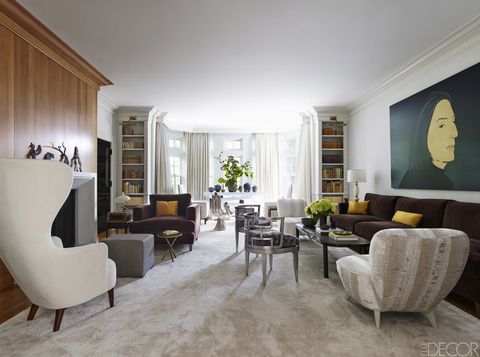