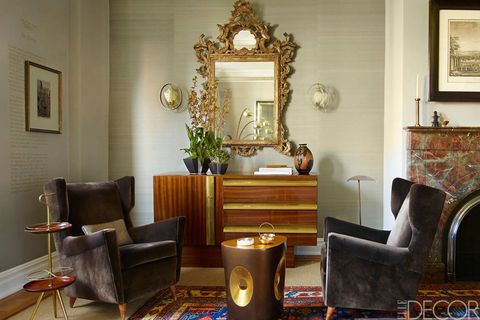 Few design projects turn out exactly as planned, but even a veteran decorator might not expect a finished residence to depart quite so dramatically from its original program as the apartment that Jim Luigs recently completed in New York City’s Gramercy Park neighborhood. For client and designer alike, it was as if a trip to the corner store had turned into a voyage to Venice.

In the living room of a Manhattan apartment designed by Jim Luigs, Italian armchairs from the 1950s, covered in a Lee Jofa velvet, flank a lacquered table by Therien; the 1930s commode is by André Sornay, the Italian gilt-wood mirror is 18th-century, and the circa-1961 sconces were designed by Max Ingrand for Fontana Arte. The silk wallcovering is by Innovations, the 19th-century rug is Persian, and the marble fireplace surround is custom made.

When Luigs was first hired five years ago, the client was a brand-new renter in the prewar building. The goal was a quick spruce-up of the three-bedroom space, which had not been renovated since the 1980s. But the results were so intriguing, and the process so engaging, that the client quickly decided to up the ante: He would buy the apartment—becoming the first of the building’s tenants to opt into its condo conversion—and push the design a little further.

Custom verre églomisé panels and a circa-1903 armchair by Hans Vollmer in the foyer; the hand-painted murals in the library beyond were inspired by Guido Crepax’s 1965 “Valentina” cartoon series.

And then—why not?—push it a little more. “Very quickly, he began to dream in a big way,” says Luigs. “He’d set a challenge, we would deliver, and his confidence would grow.” After Luigs had a cabinet lacquered, for example, the client took an interest in the highly refined finish: The bedroom is now lined in lacquered panels, and the library wears more than 40 coats (a first pass in lagoon blue was later nixed in favor of deep graphite).

In the dining room, a 1945 table by Vittorio Dassi is surrounded by 1940s American chairs upholstered in an Edelman leather; the custom cowhide rug is by Kyle Bunting, the 1960 chandelier is by Kalmar, the walls are painted in Benjamin Moore Aura in Sea Haze, and the mural by DesignRed features a quotation from Edward Gibbon’s The History of the Decline and Fall of the Roman Empire.

And a hunt for ideas for a tableware pattern prompted the client to read all three volumes of Ruskin’s The Stones of Venice, which became a source of various visual ideas—a mural here, a coffered ceiling there, and especially text passages that appear as decorative motifs throughout the residence—but also a guiding philosophy for the whole project. Says the client, “I was totally inspired by Ruskin’s idea that you allow people to express themselves spontaneously through their craft.”

A 1940s console by Osvaldo Borsani and Belgian armchairs of the same decade in the living room; the floor lamp is vintage.

For his part, Luigs quickly discerned that a few exquisite, midcentury Italian pieces could become touchstones for the entire design, launching its metamorphosis from classic Gotham crash pad to resplendent Italian salon—the kind of place where each detail entices, and every surface has a story to tell. For example, he hired cabinetmakers to model a full wall of kitchen cabinets on the profile of the delicate Osvaldo Borsani console that sits in the living room.

The foyer contains a pedestal table attributed to Gio Ponti, a 1940s verre églomisé screen, and a vintage Moroccan rug.

Luigs was a fortuitous choice for such a shape-shifting project, because his own creative process is quite fluid. “I can embrace the unknown without panicking,” says the self-taught designer. “Change is not frightening to me.” Indeed, his career has undergone a major transformation in the past decade. After many years as a successful playwright, lyricist, and theater director, he was offered an opportunity to design a home office on a Texas ranch. That project, inspired by a 1950s airplane hangar, drew international attention and launched Luigs’s second career. Today he divides his time between writing and producing his own theatrical works, teaching at New York University’s Tisch School of the Arts, and overseeing his eponymous design business.

The sitting room’s banquette and settee are upholstered in Christopher Hyland mohairs, the pendant light is 1950s Italian, and the hand-painted ceiling motifs were derived from John Ruskin’s The Stones of Venice. 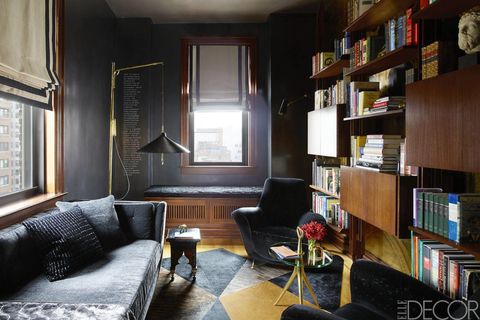 While the Gramercy apartment is clearly dramatic—in one corner, edgy comic-strip walls, an homage to Guido Crepax’s “Valentina” series, give way to an elegant and sensual library in shades of charcoal and brass—the obvious theatrical clichés don’t apply, Luigs says.

The library’s daybed, attributed to Ponti, is upholstered in a Knoll mohair, the 1940s floor lamp is by Oscar Torlasco, and the shades are of a cotton duck by Kravet with grosgrain trim by Samuel & Sons. 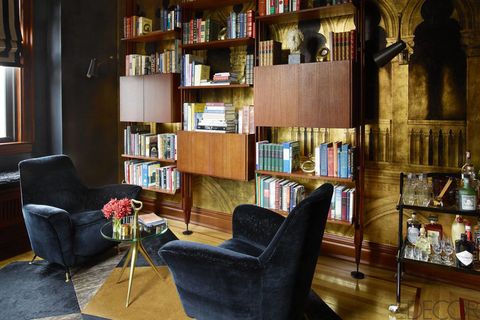 “The rooms are not stage sets,” the designer insists. Yet in other ways, his experience was critical when it came to overseeing such a complex, evolving production. “I know from my theater training that craftsmen are repositories of valuable information,” he says. Motivating everyone to perform at their peak was a key to the design’s eventual success.

In the library, a hand-painted mural on brass leaf depicting the facade of Venice’s Doge’s Palace is fronted by a 1957 shelving unit by Franco Albini; the 1960 Italian chairs are covered in a Fortuny velvet, the custom cowhide rug is based on a Ponti design, and the tripod table is by Fontana Arte.

By all accounts, it worked. “We pulled out all the stops,” says Bill Borman, the decorative painter responsible for creating the lacquered surfaces as well as the coffered TV room ceiling, the gilt-and-sgraffito mural of the Doge’s Palace in the library, the replica of a Tintoretto study on the bedroom ceiling, the églomisé panels in the foyer, and the hand-painted texts everywhere. “This was an amazing project for everyone because we were able to do our best work. It was collaborative and really organic.”

The kitchen stools and terrazzo countertop are custom made, as is the cabinetry; the sink fittings are by Waterworks, and new oak flooring inset with mahogany matches the existing flooring.

Equally important was the client’s attitude. “We were given permission to fail,” says Luigs, which, ironically, inspired everyone to surpass themselves. “We’d joke that he became a Medici”—patron to a village of craftsmen. “He was deeply involved, and very present.”

The tub surround and walls are Orion granite.

So much so that he lived through the construction, sleeping for two years on a midcentury Italian daybed in the library, and meeting with Luigs over coffee in the kitchen each morning before heading off to work. “He was delighted by the discoveries,” says Luigs. “And we fell into a rhythm of trying to please him. If, say, he was coming home from a trip, we would have something new for him to see. He would walk in and immediately call me up and say, ‘Great!'”

A pair of 1950s mirrors by Cristal Art above a custom vanity with Waterworks fittings in the master bath; the mosaic tile floor by Sicis is based on a 1st-century Pompeian mosaic at the Museo Archeologico Nazionale in Naples.

The mahogany walls and gold-leaf ceiling in the master bedroom are custom designs, the ceiling mural is based on drawings by Tintoretto, the 1960s light fixture is by Fontana Arte, and the 1949 headboard unit is by Ponti.
Like all amazing voyages, the hardest part of this project was watching it come to an end—at least for Luigs and his team. For the client, of course, the journey is just beginning.

A circa-1947 desk and chair by Charles Dudouyt in the master bedroom; the 19th-century Italian bronze sculpture is one of a pair, and the rug is Persian. 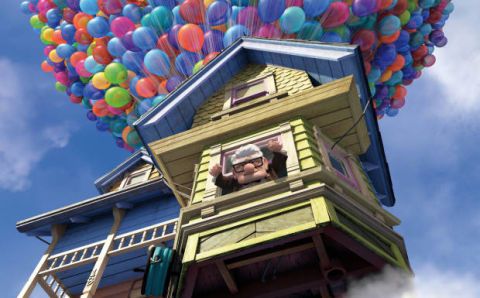