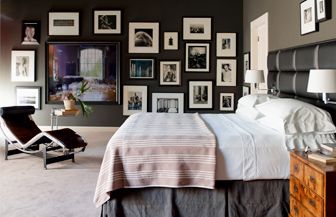 Daniel Beauchemin and Marc de Laat have lived the golden life. As an interior designer with the celebrated Jamie Drake, Beauchemin helped decorate the apartment of New York mayor Michael Bloomberg; later, as the owner of Chelsea Frames in Manhattan, he worked with such legendary tastemakers as Tom Ford and Annie Leibovitz. De Laat, a boyishly handsome Dutchman, had such a lucrative real-estate career in the Netherlands that by his early forties he was able to sell his business and focus on his passion for photography and graphic design.

But as Beauchemin approached 50, they decided to step off Manhattan’s fast track. “What do you do in New York if you don’t work?” De Laat asks. “Hang out in cafés and galleries all day?”
A few years ago they traded their Chelsea apartment and a house in Bucks County, Pennsylvania, for a small castle in the Netherlands outside Eindhoven, close to where De Laat was born and raised. Despite the property’s illustrious past—it was built in 1864 as a summer house for a member of the royal court—Beauchemin and De Laat have transformed the palatial space into a cozy and congenial abode.

“We’re homebodies now,” says Beauchemin, who spends a lot of time in their airy black-and-white-tiled kitchen. “Cooking is a form of meditation for me.” Meals are served on a polished wood Louis XVI table over which hangs a spiderlike light fixture of connected task lamps. Towering windows in the dining and living rooms frame a theatrical green landscape—the house is set in a 500-acre preserve. “I love being surrounded on all sides by nature,” De Laat says.

Beauchemin and De Laat met in 2005, while the latter was on a visit to Manhattan. A few months later De Laat moved to New York to be with Beauchemin, and began helping with his home decor projects while continuing his own photography and design pursuits.

“After I left Jamie Drake I was still occasionally designing interiors,” says Beauchemin. “I was fortunate enough to have a steady income from the frame shop, so I only took on clients who shared my design philosophy. I wasn’t interested in creating a movie set. I wanted to create a real home that told a story about the owner.”

He didn’t diverge from that ideal when it came to designing his own estate. It was crucial to Beauchemin that the interiors reflect the life that he and De Laat share.
Combining the objects they had collected before they met proved an easy task. “We have the exact same taste,” says Beauchemin. “When we finally brought our things together we couldn’t tell whose were whose. We collected the same vintage Wedgwood Queen’s Ware and the same Haags Lofje silverware pattern—he had the Dutch version and I had the British version. We owned Persian rugs so similar that they were probably woven in the same village.”

The couple also share a predilection for the same architectural styles, which became apparent when they started looking for a European property. “We wanted either pure Bauhaus or something from the 19th century,” says Beauchemin. They found the house online in the fall of 2007. Attracted by its proximity to De Laat’s family, they made an offer four months later and moved in the following spring.

“It had beautiful bones,” says De Laat, “but it was decorated like a little Disney palace, with crystals, flowery stained-glass windows, and pastel walls.” The renovation took nearly 18 months and involved recovering and painting the façade as well as replacing much of the ground-level flooring with aged wood parquet. Beauchemin oversaw the interior color scheme and furniture placement while De Laat, like a Dutch painter composing a still life, created arrangements of objects and art. One corner includes a Dutch Louis XVI card table that holds a colorful glass bowl made by a young Czech artist whom Beauchemin met at an art fair; another features examples from Beauchemin’s quirky collection of lemon squeezers alongside a vintage Christofle tea service.

But what makes the grand rooms feel intimate is the art that covers the walls, the majority of it in Beauchemin’s custom frames. The couple own close to 1,100 works, two thirds of which are on display. The collection ranges from an original edition of a Rembrandt print, to an abstract Ralph Rucci painting, to an iconic Mario Testino photograph of Princess Diana.

Not long ago Beauchemin became director of Larson-Juhl France, one of the world’s largest custom-framing companies. He now spends at least three days every week across the border, but the couple continue to garden and entertain friends in their Dutch castle. “I’m 52, and Marc will be 50,” says Beauchemin. “We’ve lived. To me, these rooms are like a good frame: a reflection of what lives inside them, rather than a distraction.” 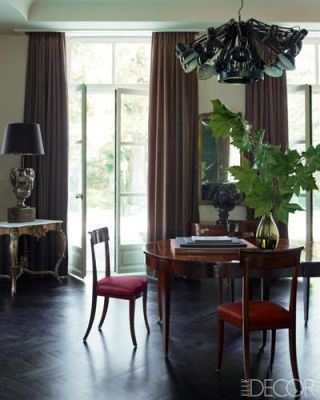 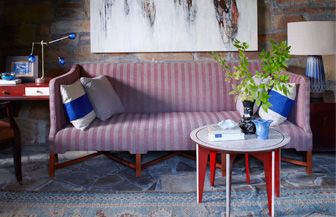 The root of matter