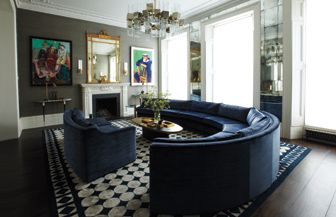 Notting Hill is famous for being one of London’s swankiest residential neighborhoods—thanks in part to the Hugh Grant and Julia Roberts movie of the same name. Nevertheless, it is home to a handful of spectacular buildings that have yet to be renovated. Australian-born designer Peter Mikic fell for one of these diamonds in the rough just over four years ago.

The object of Mikic’s affection was the larger of two mid-19th-century Italianate stucco houses, which had been, he says, “knocked together to make a rather scruffy hotel” in the 1970s. Vexingly, the property that Mikic coveted suddenly disappeared from the market. (After a bit of investigative work, he discovered it had been sold to a fashion designer.) Mikic’s partner, TV producer Sebastian Scott, suggested they look at the smaller, neighboring house. Mikic stubbornly refused. But after eight months spent fruitlessly searching the neighborhood for the perfect place, he finally acquiesced.

“It was a complete dump,” he says. “And when you walked in you could hear cooing, which turned out to be pigeons nesting on the third floor.” In true hotel style, the grand, second-floor drawing room had been carved into four rooms, each with its own kitchen and bath. “There was an overwhelming amount of work to do,” he continues, “and that’s what got me excited.”
Mikic began the project of returning the house to its former glory. “We ripped it apart,” he says. “At one point, there were only three walls left standing. You could see up to the roof from the ground floor.” The building’s long-hidden details began to reveal themselves, from the original shutters to the crown molding peeking out from behind the ’70s drywall.

The restoration included re-creating the cantilevered, Portland-­stone staircase. Mikic was horrified to learn that the original had been removed to create space for extra bedrooms. “Even the entry hall was a bedroom,” he notes. “The only entrance to the building was through the house next door.”

The ground floor now contains the dining area and kitchen, with a breakfast room at the back. There is an L-shaped drawing room on the second floor, with bedrooms on each of the three floors above. Mikic’s double-height office is situated at the top of the house, and the basement features a screening room, Scott’s office, and a gym.

When it came time to decorate, Mikic had a vision. “I wanted the house to look as though Claridge’s hotel had been transported to 1950s Milan,” he explains. “I love the idea of combining the luxury of a hotel with unique, personal details.” A host of artisans helped bring those details to life. From the rugs to the drawing room consoles to the velvet sofas, almost every piece of furniture in the house was designed by Mikic and executed by skilled craftsmen. “I had found a copy of an Adam brothers fireplace, but it was too expensive,” says Mikic. “So I Googled several marble carvers in India and sent each an image of the fireplace. One of them had already carved a copy that I liked.” Mikic flew to India and ordered six more fireplace surrounds. “Buying off the shelf is fine,” he says. “But the best bit about decorating is working with artisans and learning something new.”
Born in Canberra, Mikic never planned to be an interior designer. He studied fashion design before moving to London in 1994 and launching a successful menswear label with a fellow graduate. An interior design firm hired the pair to create uniforms for the staff of a luxury yacht; the results were so impressive the duo were hired to create many of the furnishings as well. When some friends asked Mikic to decorate the interiors of their yacht, private jet, and London home, he found himself leaving fashion behind for a new profession.

“I often draw from my experience in the fashion world,” Mikic says, “using texture, color, and proportion, layering pieces as I would with an outfit. I’m also a great believer in editing, whether it’s a wardrobe or a room. You have to know when a look is a dud.”

As with most design projects, there were sticky moments. The white grass paper chosen for the walls of the drawing room turned yellow. (It was swiftly replaced with elegant gray silk.) And it was difficult, Mikic says, to unite two adjacent areas, the kitchen and the glamorous dining room, in a harmonious way. Installing crystal-and-brass chandeliers in both spaces, as well as restoring ceiling medallions and crown molding, did the trick.

The house is 6,200 square feet, but, despite its vast size, Mikic has made sure that every inch counts. The rooms are formal enough for big dinner parties and visits from clients who come to look at the house for inspiration, but also casual enough to host friends for spaghetti-and-movie nights. Mikic says his favorite space is the breakfast room, which overlooks the garden. “The light is beautiful in the morning, and I sit here in my striped pajamas, eating my fruit and yogurt with the dogs beside me. It’s like being in the chicest hotel.” 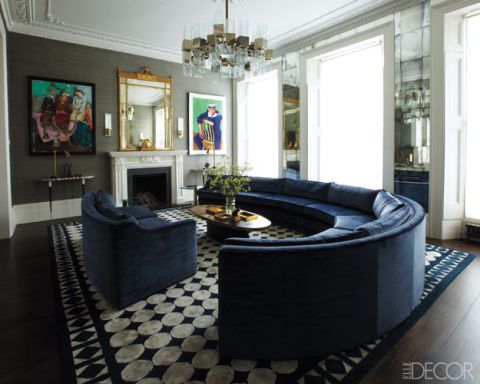 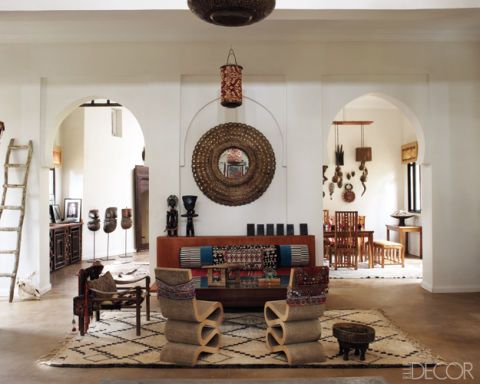